Cathbad Druid to the King of Ulster

Click 'The Oracle' title above to enter The Oracle Forum and discuss your quest for answers with kindred spirits. Courtesy costs nothing - if you disagree with someone, disagree politely. Abuse is not tolerated.
Post Reply
2 posts • Page 1 of 1

Cathbad Druid to the King of Ulster

Being possessed of a procession of Irish ancestry it struck me that our symbolic spirituality train has rarely touched on the pre-Christian faith colossi of ancient Ireland. Well if that be the case Redbeck buachaill lead on taisech, I hear you clamour. I feel sure that you won’t mind picking up a spot of Gaeilge (Irish Gaelic) along the way.

Are you sitting comfortably? Then my story begins with the ultra-mysterious Cathbad, Druid to King Conor MacNessa of Ulster, who served not only as his advisor but also eventually as a stern check and balance mechanism against excessive abuse of power by the King. We could certainly do with more of those types to temper global political autocracy as I write.

The meaning of the word druid encompasses 'oak knower' or 'oak seer' with druids often seen as members of an exclusive vocational class, but also as sorcerers. It is generally acknowledged that the druid was a spiritual intermediary, effectively a conduit to the Otherworld.

The focal environment for druidic ritual was a sacred place located close to trees. The favourite trees of the druids were the Oak and Rowan and it was on wattles from these trees that a druid would sleep to capture prophetic visions from their dreams. 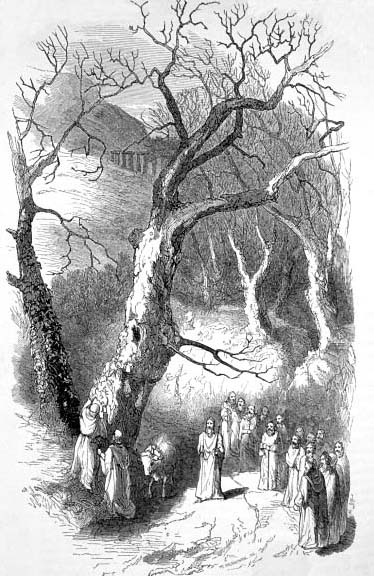 Without exception a druid's opinion was sought on matters that concerned law and tradition. They were able to identify malefactors, interpret dreams, cure illnesses and give astute military advice. The druid was believed to possess mystical powers but should not be confused with 'the bard' who was more often a leading figure such as a poet whose verse was believed to have magical connotations. Druidic teachings were based on five natural elements: earth, sea, sky, sun and moon.

Cathbad held the highest office at the Court of King Conor MacNessa in the northern most cuige (province) of Ireland. Interestingly enough cuige literally translates as a fifth part, and indeed historically there were five: Connacht, Leinster, Meath, Munster and Ulster. However the use of cuige continues despite the fact that there are now only four, the Kingdom of Meath having been divided between Leinster and Ulster en route.

Conor (or Conchobar) MacNessa ruled from his Emain Macha (Navan Fort, near Armagh) in Ulster. According to the tradition prevailing at the time no one was permitted to speak before the King, but in this relationship the King himself waited to hear what Cathbad had to say first before making pronouncements!

Cathbad's prophecies are the crux of many of the stories carried forward from an early period of Irish history, in this case 1st Century AD with Connor Mac Nessa born according to folklore on exactly the same day as Jesus Christ. These are chronicled stories not dissimilar to those that ultimately became part and parcel of the Bible. It is said that the parallel birth was deliberately orchestrated by Cathbad, who had become clairvoyantly aware of the arrival of a baby that would exert huge religious influence as an adult four thousand miles away.

In the earliest of these tales, Ness, daughter of Eochaid Salbuide, the then king of Ulster, asks the druid Cathbad whether it is an auspicious time for any particular event. Cathbad replies, ‘for begetting a king on a queen’. As there are no other suitable men around, Ness takes Cathbad to bed and she conceives a son. However a later version states that Ness is brought up by twelve foster-fathers, and while all twelve are attending a feast, Cathbad, leading a fian or landless war-band, attacks the house and kills them all. Eochaid is unable to avenge them as the culprit cannot be identified, so Ness forms her own fian to hunt Cathbad down. But while she is bathing alone in a pool, Cathbad appears to stand between Eochaid and her weapons, and draws his sword. He spares her life on the condition that she becomes his wife. They settle down close to a river named Conchobar, and Ness quickly conceives a son, but in this version the father is Ness’s lover the High King Fachtna Fathach. When she and Cathbad set out to visit Fachtna, Ness goes into labour. Cathbad tells her if she can manage not to give birth until the following day, her son will be a great king and have everlasting fame, for he will be born on the same day as Jesus Christ. Ness sits on a flat stone beside the river Conchobar, and gives birth the following morning. The baby slips into the river, but Cathbad lifts him out, names him Conchobar after the river, and brings him up as his own son.

Another cautionary semi-parable involving Cathbad, is one that concerns Cu Chulainn is one of the most famous Irish mythological heroes, he appears in the stories of the Ulster Cycle, and also in Scottish and Manx folklore. Who was said to be the son of Deichtine and the god Lugh, and the nephew of Conchobar mac Nessa. Cuchulainn took up arms after Cathbad predicted that anyone doing so for the first time on that specific day would live a memorable, but potentially short life. Immediately the boy hero Cuchulainn gathered his weapons and slew three champions who had long tyrannised Ulster, instantly becoming a hero as a result.

It was also Cathbad's prophecy about Deirdre of the Sorrows that sets her tragic tale in motion. As Deirdre was coming into the world, Cathbad was able to determine from the cry she uttered when still in the womb that the infant would ultimately attract death and destruction to those around her. Conor MacNessa tried to ward off this prophecy, but was unable to overcome his pride and jealousy which became so great that he simply could not let Deirdre go, as a grown woman, to be with Naoise, the man she loved. After luring Deirdre and the sons of Ushnu back to Ulster with a false promise of peace, the King enlisted Cathbad's help to subdue the fearsome brothers.

Cathbad agreed to help, but on the strict condition that Conor did not kill Ushnu’s sons. Cathbad then cast a spell which caused the warriors to believe themselves enveloped by water. Forced to swim due to his deception, their arms became so exhausted that they dropped their weapons. The duplicitous King then seized his opportunity and ordered the brothers executed, keeping to the letter rather than the spirit of his promise by having someone else actually do the dastardly deed.

Cathbad enraged at the King's blatant abuse of power immediately put a curse on Conor MacNessa blighting his regal line so that it would end with his reign with no descendants. This was considered a terrible curse in a culture that prized a person's legacy and lineage.

Nevertheless King Conor MacNessa was proud and haughty man and as the father of many sons believed himself immune to Cathad’s wrath. However, he underestimated the power of the druid's curse and over the course of his life, all his sons died one by one, and as he entered old age only the exiled Cormac Cond Longas still survived, living in Connaught. The King therefore asked Cormac to come back to Ulster to succeed him. Cormac agreed, but on the journey to reunite with his father, fell victim to a deadly accident, fulfilling Cathbad's curse.

Cathbad is undoubtedly the quintessential druid of Irish mythology, perhaps we should refer to it as ameliorated history, which is essentially is what the Bible is. The relationship between King and druid was extremely important, for it determined the longer term fortune of the King and his subjects.

A good King was seen to realise robust harvests of good corn and mast, consequently prosperity for the people. Thus the druid represents the child of wisdom, born of the male sun representing the cult of the King with mother earth symbolized by the female Goddess. Despite possessing immense knowledge, a druid also held great power. Not only did druids serve a high king, but they also effectively policed the ruler’s power for the greater good; a millennium of civilisation later and we are still in sore need.
Top

Re: Cathbad Druid to the King of Ulster

However, Rochraide mac Cathbad mac Cathbad was also the Father of Mael mac Rochruidhe mac Rochruidhe, who became High King of Ireland who sadly reigned for but four years before being slain by good wholesome lawmaker Feidhlimidh Rechtmhar who succeeded him on the throne.

As his successor, Feidhlimidh established the law of 'Retaliation' thereby preserving the people in peace, quiet, plenty, and security during his tenure, marrying Ughna daughter of the King of Denmark in the process, thereby negating the prospect of Viking raids. However perhaps due to the spiritual baggage incurred by taking a life which is often ultimately returned in kind he reigned for a mere eight years, meeting a bizarre death from thirst in 119 AD. The retribution of Cathbad perhaps another curse from the otherworld for daring to damage the family line! 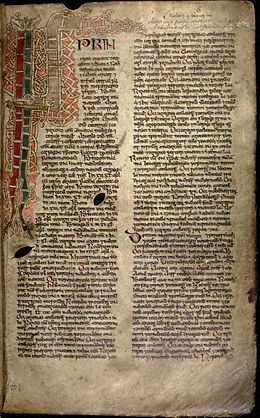